DeSantis: Florida chose ‘freedom over Faucism’ in response to COVID 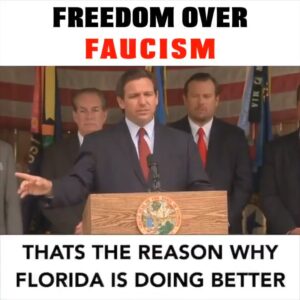 All Aboard Air Fraudci: A Lie As American As Apple Pie

About Jeff Berwick  Anarcho-Capitalist.  Libertarian.  Freedom fighter against mankind’s two biggest enemies, the State and the Central Banks. Jeff Berwick is the founder of The Dollar Vigilante and creator of the popular video podcast, Anarchast

Number of Deaths Reported After COVID Vaccines Jumps by More Than 2,000 in 1 Week, According to VAERS

Data released today by the Centers for Disease Control and Prevention (CDC) included 9,049 reports of deaths, across all age groups, following COVID vaccines — an increase of more than 2,000 compared with the previous week. The data comes directly from reports submitted to the Vaccine Adverse Event Reporting System (VAERS).

VAERS is the primary government-funded system for reporting adverse vaccine reactions in the U.S. Reports submitted to VAERS require further investigation before a causal relationship can be confirmed.

Every Friday, VAERS makes public all vaccine injury reports received as of a specified date, usually about a week prior to the release date.

As The Defender reported today, U.S. federal health agencies and the maker of one of the most popular COVID vaccines are publicly at odds over if or when fully vaccinated people will need a third “booster” dose.

Pfizer announced Thursday it will seek Emergency Use Authorization from the FDA in August for a third dose of its COVID vaccine. The drugmaker predicted those who have been fully vaccinated will need a booster shot within six to 12 months of receiving their second dose of the Pfizer vaccine.

But the U.S.Department of Health and Human Services (HHS) hours later issued a joint statement by the FDA and Centers for Disease and Control and Prevention (CDC) saying, “Americans who have been fully vaccinated do not need a booster shot at this time. REF: Full press

By: Megan Redshaw is a freelance reporter for The Defender. She has a background in political science, a law degree and extensive training in natural health.   ” Megan Redshaw