there were 400 recorded cases of vaccine-derived polio in more than 20 countries worldwide. 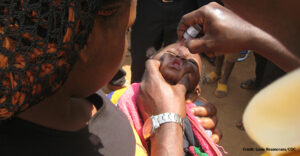 (Natural News) A new report by the World Health Organization (WHO), a branch of the United Nations (UN), confirms everything we have long been saying about the deadly nature of Bill Gates’ vaccination programs in the Third World.

Entitled, “Circulating vaccine-derived poliovirus type 2 – Sudan,” the report outlines how polio vaccines from the Bill & Melinda Gates Foundation are spreading more polio throughout Africa. Not only that, but these “relief” jabs are killing young black lives in places like Chad and Sudan where outbreaks of the vaccine-induced disease are spreading like wildfire.

Amazingly, the WHO openly admits that the strain of poliovirus currently circulating, known as cVDPV2, is “vaccine-derived.” This clearly indicates that it is being spread by the very same vaccines that Bill Gates claims are helping to “save lives” and “eradicate polio.”

“Sequencing of viruses isolated in Sudan so far reflects that the viruses are related with viruses reported earlier in neighboring Chad from where there were multiple separate introductions into Sudan from Chad,” the report explains.

“There is local circulation in Sudan and continued sharing of transmission with Chad.”

As far as we know, this is the first time that an official government body – and the WHO, no less – has used the words “vaccine-induced” to describe how and why polio is still spreading all throughout Third World Africa.

“After spending some $16 billion over 30 years to eradicate polio, international health bodies have ‘accidentally’ reintroduced the disease to Pakistan, Afghanistan, and also Iran, as the central Asia region was hit by a virulent strain of polio spawned by the pharmaceutical vaccine,” reports 21st Century Wire.

“Also, in 2019, the government of Ethiopia ordered the destruction of 57,000 vials of type 2 oral polio vaccine (mPOV2) following a similar outbreak of vaccine-induced polio … The same incident has happened in India as well.”

Would you trust COVID-19 vaccines from Bill Gates in light of the polio fiasco?

All of this is cause for concern when considering that the same Bill Gates who is killing innocent black lives with polio vaccines now wants these same black lives to be jabbed with vaccines for the Wuhan coronavirus (COVID-19).

Right this moment, the GAVI Vaccine Alliance, another Gates Foundation-funded vaccine group, is testing experimental Wuhan coronavirus (COVID-19) vaccines on young black lives without informed consent. Does this seem legitimate to you, and something you would agree to in the event that it was suddenly thrust on you and your family?

“This is why Robert F. Kennedy Jr.’s law firm has filed a lawsuit against Gates for crimes against humanity,” wrote one commenter about the hopeful demise of Bill Gates and his corrupt vaccine empire.

“And why India has also filed a lawsuit against Gates for crimes against humanity, but in India Gates caused the paralysis of over 450,000 babies and children with his life-threatening and disabling poisons called vaccines.”

If you are interested in learning more about the dangers and ineffectiveness of vaccines, be sure to check out Vaccines.news.

Sources for this article include: