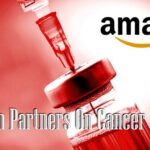 A new filing with the National Institutes of Health reveals Amazon is collaborating with Fred Hutchinson to develop a vaccine for skin cancer and certain breast cancers, as it sets its sights on a piece of a multi-billion-dollar industry.

Amazon is launching itself further into the billion-dollar healthcare industry by collaborating with the Fred Hutchinson Cancer Center to develop cancer vaccines in a new clinical trial approved by the U.S. Food and Drug Administration (FDA).

According to a filing with the National Institutes of Health, Fred Hutch is testing a “personalized” vaccine for patients with late-stage melanoma skin cancer and certain breast cancers that have metastasized or are unresponsive to other treatments.

The Fred Hutchinson Center based in Seattle sponsors and leads the study, while Amazon, a partner of the World Economic Forum, is listed as its sole collaborator.

Amazon and Fred Hutch are looking to recruit 20 participants over the age of 18 for the early stage, or phase 1 trial, with the goal of developing “personalized vaccines” that can treat breast cancer and melanoma, CNBC reported.

The vaccine is personalized with a combination of each patient’s own tumor antigens, with the goal of inducing T cell activity against the tumors expressing those antigens.

The trial involves a 25-week regimen of the vaccines — absent any complications — and offers follow-ups over the subsequent 12 months.

​​The study was first posted on ClinicalTrials.gov in October 2021 and began on June 9. The clinical trial is expected to be completed by Nov. 1, 2023.

According to Allied Analytics LLP, the cancer vaccine global market was valued at $4.18 billion in 2019 and is projected to reach $7.30 billion by 2027.

Amazon is providing “scientific and machine learning expertise” to the latest Fred Hutch endeavor, a company spokesperson told The Hill. The vaccine is in the early stages, and “it’s unclear whether it will be successful.”
The project will take several years to complete. “Should it progress, we would be open to working with other organizations in health care and life sciences that might also be interested in similar efforts,” the spokesperson said.

This One Diet Can Cure Every Disease

A representative of Fred Hutch confirmed the collaboration with Amazon and said in an emailed statement:

“Fred Hutch is working with Amazon to explore the development of a personalized treatment for certain forms of cancer. Fred Hutch recently received permission from the U.S. Food and Drug Administration to proceed with a Phase I clinical trial, which is now underway. It’s very early in a long, multi-year process, and success is by no means guaranteed. The program is an important example of how Fred Hutch works with collaborators to develop new therapies.”

“I question the integrity of a vaccine involving the Fred Hutch group after litigating devastating injuries related to the Gardasil vaccine, which they helped pioneer,” attorney Michael Baum told The Defender in an email.

“Gardasil was rushed through approval without proper safety oversight and shoddy clinical trials, according to the evidence and allegations my firm is litigating against Merck right now.”

MOV is indicated for use in adults with mild to moderate COVID-19 who are at risk for severe disease or hospitalization.

“The efficacy of this product [MOV] is not overwhelmingly good,” said Dr. David Hardy, an infectious-disease physician at Cedars-Sinai Medical Center in Los Angeles, during an FDA advisory meeting to discuss authorization of the drug.

Members of the FDA’s Antimicrobial Drugs Advisory Committee who voted against authorizing MOV for emergency use said more research was needed about the drug’s safety.

“The risk of widespread effects on potential birth defects, especially delayed effects on the male, has not been adequately studied,” said Dr. Sankar Swaminathan, chief of infectious diseases at the University of Utah.

THEY NEED YOUR CHILDREN TO VACCINATED IN ORDER TO INSTALL A GLOBAL SOCIAL CREDIT SYSTEM.

Melissa Ciummei, a financial investor from Northern Ireland, has serious concerns that injection passports will be used more like data passports to control participation in society.

According to an interim analysis of a clinical study presented by Merck, MOV cut the risk of hospitalization or death in half.

Among people who got the drug, 7.1% were hospitalized or died, compared with 14.1% who got the placebo. However, the final analysis released on Nov. 26, 2021, showed only a 30% reduction in the risk of hospitalization or death.

The FDA’s summary showed patients in the group treated with MOV during the second half of the study were more likely to be hospitalized or die than those who received the placebo.

Amazon, an online retail giant, has been pushing itself into the healthcare industry since the start of the COVID-19 pandemic.

Amazon Care is a branch of the eCommerce titan created in 2019 and provides healthcare to Amazon employees and their dependents. It then expanded to its Washington state employees in 2020.

Amazon in 2021, extended virtual care to its employees in all 50 states, and in 2022, employees in 20 major U.S. cities will be able to access in-person healthcare services, including home or office visits and telehealth.  Ref: Megan Redshaw  Megan Redshaw is a staff attorney for Children’s Health Defense and a reporter for The Defender.

This year, Amazon plans to subtly venture into primary care and utilize Alexa, the company’s virtual digital assistant, to provide an “at-home care model” for the older population.