Is Your Child Eating Candy That Contains This Possible Carcinogen?

Titanium dioxide, a possible carcinogen used as an artificial color additive, anti-caking agent or whitener in supplements and in a wide variety of processed foods — including candy — is linked to changes in gut microbiota that may lead to inflammatory bowel disease or colorectal cancer. 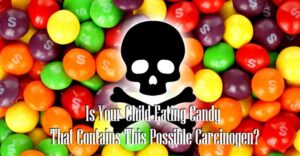 Is Your Child Eating Candy That Contains This Possible Carcinogen+1

Even when choosing supplements to protect and support your health, you may inadvertently be ingesting a toxic poison.

A class action lawsuit filed in California by a San Leandro resident claims the “taste the rainbow” candy — Skittles — is “unfit for human consumption.”

The toxin is nanoparticles of titanium dioxide, which is used in many foods as an artificial color additive. It is also used as an anti-caking agent and whitener in a wide variety of foods, including chewing gum, salad dressing, baked goods and coffee creamer.

According to The New York Times, it is also found in nonfood items such as paints, plastic, sunscreen, cosmetics and medications. It has no nutrient value, and while it is linked to poor gut health, the full health impact is still under investigation.

When the product is included in food, it’s known as E171. When it’s added to other products you may see PW6, CI 778916 or tiO2 on the label. It may also just be included as “color added.”

Because it naturally reflects ultraviolet light, it is often added to sunscreen. Topical use has resulted in allergic reactions, some of which can be serious.

When inhaled as dust, titanium dioxide is classified as possibly carcinogenic to humans by the International Agency for Research on Cancer.

In response to public pressure, Dunkin’ Donuts committed to taking titanium dioxide out of the powdered sugar on their doughnuts. However, since it doesn’t add to the flavor of the doughnuts, it seems like a decision that could have been made without pressure from customers.         Is Your Child Eating Candy That Contains This Carcinogen

The class action lawsuit was filed on July 14 in northern California. It alleges that Mars Inc. had knowledge of the health problems that titanium dioxide posed and had even committed in 2016 to remove it from their products.

The 2016 press release reported that the company “reiterated its commitment to remove harmful and potentially poisonous nanoparticles of titanium dioxide from its food products, including many popular candies.”

The press release was a follow-up to a statement Mars Inc. had made Feb. 5, 2016, when it committed to removing artificial colors in the next five years.

However, six years later, as reported by The New York Times, Mars Inc. still has not acted on the promise.

In an email to The New York Times, the vice president of Mars Wrigley North America wrote that using titanium dioxide:

“Is in full compliance with government regulations. While we do not comment on pending litigation, all Mars Wrigley ingredients are safe and manufactured in compliance with strict quality and safety requirements established by food safety regulators, including the F.D.A.”

According to the class action lawsuit, the company defied its own statement and continued to sell the candy with titanium dioxide. When approached by The New York Times, the company did not answer the question of whether they plan to remove titanium dioxide from their food products sold in the U.S.

Titanium dioxide added to many foods, candy and supplements

Titanium dioxide falls into a group of food additives that include preservatives. These are added to foodstuffs, spices, condiments and supplements to help slow spoilage and extend shelf life.

Color additives are also used in foods, drugs and cosmetics. Although Mars includes titanium dioxide in Skittles, competitors with comparatively similar colorful candy do not.

For example, according to the Los Angeles Times, Swedish Fish, Black Forest gummy bears and Sour Patch Kids do not use titanium dioxide in production. Skittles currently ranks among the top favorite non-chocolate candies in America.

The lawsuit also alleges that the company did not warn consumers of a potentially dangerous toxin in the candy and has therefore committed a fraud of omission.

The company says that FDA regulations permit the use at less than 1% of the dry weight of the food.

However, the lawsuit claims: “Defendant relies on the ingredient list which is provided in minuscule print on the back of the Products, the reading of which is made even more challenging by the lack of contrast in color between the font and packaging.”

Titanium dioxide is produced in two different sizes. The pigment grade is a larger particle that is used to whiten or brighten a product formulation, while the nano grade is transparent and colorless, often used in sunscreens.

Unilever uses it in toothpaste as a white colorant in pigment grade size. They produce toothpaste with and without titanium dioxide and it’s included in other home care products including dishwasher tablets, toilet blocks and laundry detergent.

Nanoparticles and gut inflammation, effect may be amplified

Nanoparticles have gained popularity in the food industry and titanium dioxide has been added to a wide variety of products from chewing gum and chocolate to milk powders and mayonnaise.

Although it had been considered inert for many years, scientists have raised concerns about nano-sized titanium dioxide.

Researchers have expressed concern that topical application and consumption in food and pharmaceutical products could result in absorption and toxicity, as well as entry into the environment, where it could induce a range of sublethal effects.

One animal study published in 2019 demonstrated that nanosized titanium dioxide had a small impact on the composition of the microbiota, but altered the release of bacterial metabolites and the distribution of bacteria in the lab by promoting biofilm formation.

Other changes indicated that titanium dioxide had a significant impact on gut microbiome homeostasis and the changes were associated with inflammatory alterations that collectively impaired cellular function and promoted an inflammatory environment, which could lead to inflammatory bowel disease or colorectal cancer.

One of the researchers commented on the importance of these results, saying:  “It is well established that dietary composition has an impact on physiology and health, yet the role of food additives is poorly understood. There is increasing evidence that continuous exposure to nanoparticles has an impact on gut microbiota composition, and since gut microbiota is a gatekeeper of our health, any changes to its function have an influence on overall health.

“This study presents pivotal evidence that consumption of food containing food additive E171 (titanium dioxide) affects gut microbiota as well as inflammation in the gut, which could lead to diseases such as inflammatory bowel diseases and colorectal cancer.”

The impact that titanium dioxide has on gut health is complicated. However, research has also shown that multiple food additives consumed in combination may have an amplified effect.

In 2015, Denmark’s National Food Institute led a large project on the health effect of chemical cocktails in food. They found that even small amounts could amplify the adverse effects when they were combined.

Denmark’s National Food Institute reported:  “A recently completed, four-year research project on cocktail effects in foods … has established that when two or more chemicals appear together, they often have an additive effect.

“This means that cocktail effects can be predicted based on information from single chemicals, but also that small amounts of chemicals when present together can have significant negative effects.”

This study did not address nano-sized additives. However, it stands to reason that since nanoparticles tend to be more unpredictable than their conventional counterparts when they are combined with other additives, the risk of toxicity may be magnified.

The New York Times reports that the FDA has recognized the use of titanium dioxide in food as safe since 1966. However, studies published since then have continued to raise safety questions.

As reported by the Los Angeles Times, at approximately the same time that Mars released their plan to phase out titanium dioxide, the European Food Safety Authority reported they were uncertain about the ingredients.

However, by May 2021, after reviewing the evidence, the European Union (EU) banned the use of titanium dioxide in food and required that it be eliminated by Aug. 7.

The European Food Safety Authority expressed its concern about the potential carcinogenic effects and stated:

“Based on all the evidence available, a concern for genotoxicity could not be ruled out, and given the many uncertainties, the panel concluded that E 171 can no longer be considered as safe when used as a food additive.”

While food companies have been phasing out the use of titanium dioxide in products shipped to the EU, they have not for foods sold in Britain, Canada and the U.S.

The New York Times requested a comment from the FDA about the EU ban. An official stated that the available studies on titanium dioxide do not demonstrate any safety concerns.

Pierre Herckes, professor of chemistry at Arizona State University, was a researcher on a 2014 study on titanium dioxide. He told The New York Times there was cause for concern since many of the candies with the highest levels of the toxin are consumed by children.

Scott Faber, senior vice president at the Environmental Working Group, added that steering clear of titanium dioxide is difficult since companies are not required to publish it on their ingredients list and it may be included in the simple statement, “color added.”

Faber said:  “Titanium dioxide is really the poster child for many chemicals that were reviewed, in some cases, more than 50 years ago for safety by the F.D.A. and haven’t been reviewed since. So titanium dioxide is part of a bigger story about regulatory failure.”

Tatiana Santos, chemicals manager with the European Environmental Bureau, told The Guardian, “The U.S. often waits until the harm is done, and the EU tries to prevent it to a certain extent. It often seems the U.S. favors the market over protection.”

Condiments are a mix of damaging chemicals

One category of food that Americans often don’t think about when they’re looking at their personal choices is condiments. Since only a spoonful is used, they’re usually given a free ride or brushed off as harmless since they’re eaten in such small quantities.

But, far from being benign, they can have a cumulative biological effect and scientific evidence has demonstrated that this may happen at low doses rather than high doses, especially for hormone-disrupting chemicals.

Examples of commercially prepared condiments that are unhealthy include:  Mayonnaise — Most commercially prepared mayonnaise uses primarily GMO soybean oil, which is one of the most harmful oils you can eat. Whether it is partially hydrogenated, organic or even made from newer varieties, it causes chaos at the cellular level.

However, mayonnaise is easy to make in a blender with organic eggs and healthy oils. It doesn’t last as long, but it tastes much better and can be made with just a few basic ingredients. You’ll find a good recipe at The Hungry Mouse website.

Despite decades of evidence, the FDA still maintains it’s safe. Culturing your own sour cream at home has the added benefit of natural probiotics which are killed off during commercial processing. For more information on making your own cultured sour cream visit Cultures for Health.

The good news is that you do not have to give up condiments. Instead of grabbing a commercially prepared bottle at the grocery store, make your own using real food that’s packed with nutrition. You’ll be reducing the excess sugar in your diet, and eliminating preservatives, dyes and flavor enhancers.

With a little creativity, you may even come up with a recipe that tastes far better than the chemical-laden counterpart you buy at the grocery store. Make your condiments with high-quality ingredients and remember to eat reasonable portions.  Ref: Originally published by Mercola