Around the turn of the 20th century, Americans began switching from consuming animal fats to using processed vegetable oils, thanks to the machinery of the industrial revolution.

Cottonseed oil was used to run agricultural machines before fossil fuels were discovered. Around that time, Procter and Gamble (P&G) figured out the hydrogenation process, a way to use the cotton seeds for food.  Heart Disease and Processed Vegetable Oils Corruption

Cottonseed oil also became a key ingredient for P&G’s formula for their soap industry, because it was cheaper than coconut oil and palm oil. The coagulated oil looked just like lard, so P&G marketed it as “Crisco.” It was said to be “digestible.” Who knew? Free cookbooks using Crisco as the base oil were handed out across the nation, and moms everywhere took the bait – hook, line and sinker.

Seed oils: Margarine and Crisco marked the beginning of the poly-unsaturated fat wave and the rise of heart disease in America

Today, most seed oils are GMO. That means they have weed-killer residue on them, also known as glyphosate. Glyphosate is a known carcinogen and has been linked to cancer and kidney failure in tested lab animals. These oils are cooked at high heat, which leads to oxidation. Oxidation damages vital molecules in human cells, including proteins and DNA. This leads to cell malfunction (cancer) and cell death. Heart Disease and Processed Vegetable Oils Corruption

The seed oils are then processed using deadly chemicals like hexane, a vapor constituent of gasoline and crude oil. More chemicals are used to eliminate rancid odors and to give them a clear color (deceptively healthy look).

Heart disease in the early 1900s was barely existent. Then came the popularity of these processed seed oils. By the mid-1900s, P&G literally paid the American Heart Association (AHA) $1.5 million to promote Crisco as a “healthy alternative” to animal fat, the same way that Big Tobacco paid the American Medical Association (AMA) to promote cigarettes as healthy for digestion (and recommended by thousands of doctors). 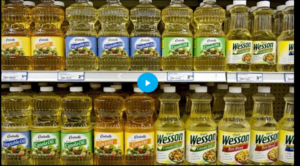 Heavily processed industrial “food stuff” oils were marketed as “healthy” even into the late 1960s, when scientists and the AHA had already figured out they were horrible for the heart and blood. Low-quality, poly-unsaturated oils are found in almost every processed food item in America. It’s no wonder obesity, dementia, heart disease, diabetes and cancer are so prominent here. Check your chips, cookies, bread, baked goods, salad dressings and mayonnaise, for starters. It’s almost impossible to order food at a restaurant and avoid these deadly oils.

Fryers at restaurants get clogged up when seed oils cool and coagulate. Imagine what’s happening inside your blood vessels. They become polymerized, like the drain pipes at restaurants. The FDA joined in the corruption, calling these oils “generally recognized as safe” (GRAF) for decades, all the way until about 10 years ago, meaning the FDA has recommended that Americans consume UNSAFE food stuff for decades.

Choose olive oil, coconut oil and avocado oil instead of the FDA-recommended death trap oils. Since olive, coconut and avocado oils don’t need all that industrial processing and chemicals to process, they don’t do the chronic damage to your system, like the others. Simply choose a saturated fat or animal fat for cooking food instead.

Americans who take the advice of our regulatory agencies are the sickest people in the world. These are folks who get heart disease in their 40s and 50s and need triple-bypass surgery just to continue living. People who get cancer tumors and polyps in their colon can’t seem to figure out why, and their medical doctors blame their genetics and “hereditary” lineage. It’s absurd.

Until medical doctors begin giving proper advice to their patients about avoiding processed seed oils like the plague, Americans will continue to suffer at the hands of the Big Food Oil industry. Canola oil is the absolute worst of them all. Canola oil is made from rapeseed oil and was used to kill bugs before it was made into “food stuff.” Canola oil is Canada’s biggest export, and they barely eat it themselves!

Most of the advice coming from the AHA, AMA, CDC and FDA is based on corrupt science, buried science, warped science and outright lies. Sure, America is a great country because we have the freedom to choose what we speak, print and eat, so make wise choices, and read the labels on everything you eat, drink, put on your body and use to clean your home and/or office. Become the smartest consumer you know, and you can avoid all those preventable diseases suffered by two-third’s of our country’s consumers.