The numbers reflect the latest data available as of Jan. 29 from the CDC’s Vaccine Adverse Event Reporting System website. Of the 501 reported deaths, 453 were from the U.S. The average age of those who died was 77, the youngest was 23.  By Children’s Health Defense Team

As of Jan. 29, 501 deaths — a subset of 11,249 total adverse events — had been reported to the Centers for Disease Control and Prevention’s (CDC) Vaccine Adverse Event Reporting System (VAERS) following COVID-19 vaccinations. The numbers reflect reports filed between Dec. 14, 2020, and Jan. 29, 2021.

VAERS is the primary mechanism for reporting adverse vaccine reactions in the U.S. Reports submitted to VAERS require further investigation before confirmation can be made that an adverse event was linked to a vaccine. 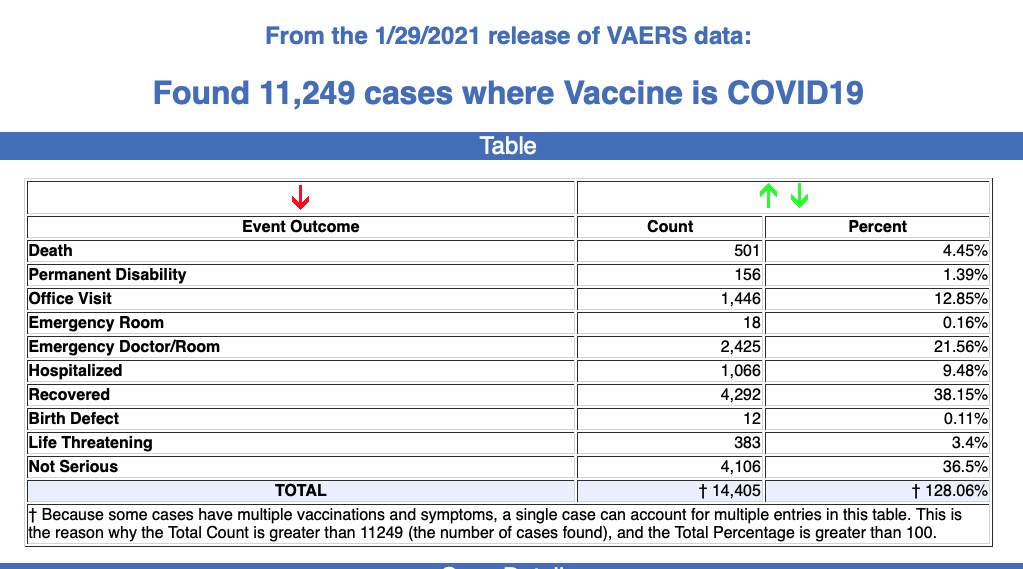 As of Jan. 29, about 35 million people in the U.S. had received one or both doses of a COVID vaccine. So far, only the Pfizer and Moderna vaccines have been granted Emergency Use Authorization in the U.S. by the U.S. Food and Drug Administration (FDA). By the FDA’s own definition, the vaccines are still considered experimental until fully licensed.

As The Defender reported today, a 56-year-old woman in Virginia died Jan. 30, hours after receiving her first dose of the Pfizer vaccine. Doctors told Drene Keyes’ daughter that her mother died of flash pulmonary edema likely caused by anaphylaxis. The death is under investigation by Virginia’s Office of the Chief Medical Examiner and the CDC.

Last week, the CDC told USA TODAY that based on “early safety data from the first month” of COVID-19 vaccination the vaccines are “as safe as the studies suggested they’d be” and that “everyone who had experienced an allergic response has been treated successfully, and no other serious problems have turned up among the first 22 million people vaccinated.

Other vaccine injury reports updated this week on VAERS include 139 cases of facial asymmetry, or Bell’s palsy type symptoms, and 13 miscarriages.

The clinical trials suggested that almost all the benefits of COVID vaccination and the vast majority of injuries were associated with the second dose.

While the VAERS database numbers are sobering, according to a U.S. Department of Health and Human Services study, the actual number of adverse events is likely significantly higher. VAERS is a passive surveillance system that relies on the willingness of individuals to submit reports voluntarily.

According to the VAERS website, healthcare providers are required by law to report to VAERS:

The CDC says healthcare providers are strongly encouraged to report:

However, “within the specified time” means that reactions occurring outside that timeframe may not be reported, in addition to reactions suffered hours or days later by people who don’t report those reactions to their healthcare provider.

Vaccine manufacturers are required to report to VAERS “all adverse events that come to their attention.”

Historically, fewer than fewer than 1% of adverse events have ever been reported to VAERS, a system that Children’s Health Defense has previously referred to as an “abject failure,” including in a December 2020 letter to Dr. David Kessler, former FDA director and now co-chair of the COVID-19 Advisory Board and President Biden’s version of Operation Warp Speed.

A critic familiar with VAERS’ shortcomings bluntly condemned VAERS in The BMJ as “nothing more than window dressing, and a part of U.S. authorities’ systematic effort to reassure/deceive us about vaccine safety.”

CHD is calling for complete transparency. The children’s health organization is asking Kessler and the federal government to release all of the data from the clinical trials and suspend COVID-19 vaccine use in any group not adequately represented in the clinical trials, including the elderly, frail and anyone with comorbidities.

CHD is also asking for full transparency in post-marketing data that reports all health outcomes, including new diagnoses of autoimmune disorders, adverse events and deaths from COVID vaccines.

Children’s Health Defense asks anyone who has experienced an adverse reaction, to any vaccine, to file a report following these three steps.